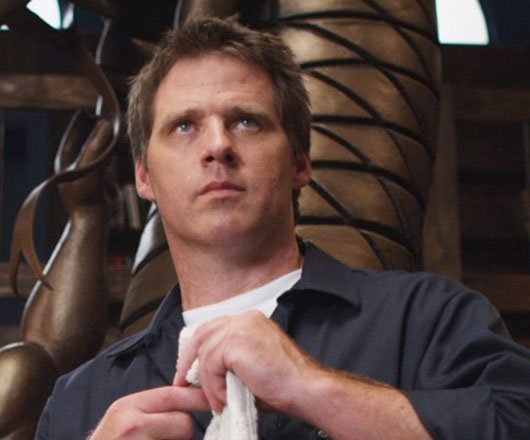 “Maintenance and deliveries... that's my job.”

Ben Browder is an American actor, writer, and director born in Memphis, Tennessee.

After a successful college football career, college theatrics and a degree in Psychology at Furman Universityin South Carolina, Ben moved to London to study classical acting at the Central School of Speech and Drama.

Ben's acting career started in Charlotte, North Carolina where he was raised. In the late 60's he made TV commercials. In the late 70's he appeared in the children's movie Duncan's World playing Gates, one of Duncan's best friends.

He worked as a guest on various TV series, TV pilots and movies before he got his first noted TV series role as Sam Brody in Party of Five's 3rd season beginning with episode 9, titled Gimme Shelter.

In 1999, Ben got a major break as the star of the science fiction TV series Farscape in which he played astronaut and scientist John Robert Crichton. The series ran for four seasons on what was then known as the SciFi cable channel until 2002 when it was cancelled. After finding financing, Farscape: The Peacekeeper Wars was created to finish the Farscape series which had ended with a cliffhanger at the end of the 4th season.

Ben also starred as Lt. Colonel Cameron Mitchell in the 9th and 10th seasons of the science fiction TV show Stargate SG-1 after series star and producer Richard Dean Anderson left the show. Since his return from Canada and the making of two movies for Bridge Studios (Ark of Truth and Continuum where he reprised his role as Lt. Col. Cameron Mitchell), Ben has guest-starred on Arrow twice, Doctor Who, Chuck, and CSI. He also starred in a children’s film called The Adventures of Roborex (2014) and Dead Still (2014). Most recently he played George Tildon in JT Mollner's Sundance Festival Film Outlaws and Angels.

Ben has been nominated for the genre industry's Saturn award five times. He took home the award in 2002 for Best Actor in a Television Series (Farscape) and again in 2005 for Best Actor on Television (Farscape: The Peacekeeper Wars).

Ben makes a few convention appearances each year. In 2012, that included the US and Australia. In 2013, he was in the US - Chicago Stargate Convention, Germany, New Zealand and Australia.

In addition to making his feature film directorial debut, Ben reprises his role of Max, the Janitor, in Bad Kids of Crestview Academy, based on the best-selling comic book series "Bad Kids Go 2 Hell," due to hit theaters in 2016.

Ben is married to actress Francesa Buller. They met in acting school in London. Ben and Francesca have two children.