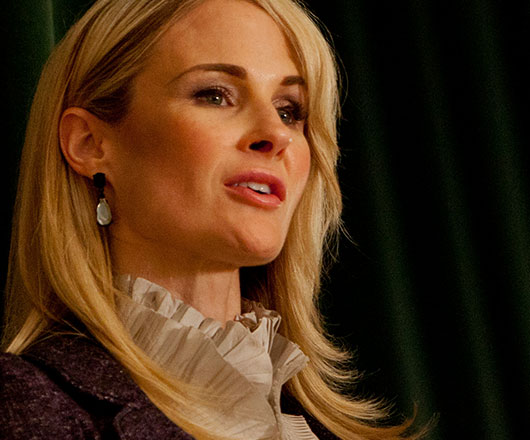 She's got spirit, yes she does.

Chanel, an American actress has successfully navigated the acting and modeling industry over the past decade. Descriptions of Chanel are as varied as the roles she plays. A ball of energy with captivating eyes in a pretty blonde package. She's a chameleon with strength, vulnerability, and great comedic timing in equal amounts. She shines in the lighter, bubbly types and specializes in darker material, playing edgy and troubled young women as well. Ryan's first movie appearance was in the independent film "Waiting for the Rocket". When she auditioned for the film "George Wallace" legendary director John Frankenheimer offered her the part on the spot, working with veteran actors Gary Sinise and Mare Winningham. Next she landed the role of one of the Felon Cheerleaders in the Universal film BASEkeball, from the creators of South Park and director David Zucker. Her improv training with the Ground- lings and ACME Comedy Theater helped her garner a guest starring role opposite Bill Murray in the pilot "The Sweet Spot". During the early years of her career, Chanel's main focus was modeling. In 2011, she shifted her attention from modeling to acting full time. Her recent acting roles include Jonas Akerlund's "Small Apartments" with James Caan and Billy Crystal; "Dorothy and the Witches of Oz", starring Sean Astin, Christopher Lloyd and Lance Henrickson; "Skum Rocks" with Alice Cooper and "Bad Kids Go To Hell" with Judd Nelson and Ben Browder, based on the best-selling comic book. She appears as "Fantazia" in the cult classic follow-up "Hobgoblins 2" from director Rick Sloan and is next featured in, the soon-to-be-released horror film, "Alice D.", where she plays horror icon Kane Hodder's evil sidekick "Isabel"; Creature Feature "Dead Sea" alongside scream queen Devanny Pinn; and the upcoming drama "Bigger Than The Beatles" as Candice Bergen. Next, she is starring in two independent films; horror film "Circus of the Dead" alongside genre legend Bill Oberst Jr., the psychological thriller "House on Rodeo Gulch". Always striving for more from her career, the progression to producer was only natural. She is currently in development on her feature film producing debut: "Crimson Saints", where she brings her extensive experience, knowledge of public relations/marketing/branding and her vast rolodex to the project. Chanel has studied with some of L.A.'s most respected and renowned acting coaches including Margie Haber (Master Class), Aaron Speiser, Lesly Kahn, John Rosenfeld and Scott Seditas. Her affinity for accents and extensive dialect coaching from the "Master of Voices", Bob Corff, has helped her perfect numerous accents, from British to Southern. She's proficient with handguns, automatic rifles and shotguns, as well as hand to hand combat including knife and firearm disarmament. To date, Chanel has appeared in over 30 national commercials including Pepsi, Saturn, Volkswagen, Del Taco, Wet & Wild Cosmetics, Audi, Coca-Cola, and VISA. You have seen her in campaigns for Anheuser Busch, Burke Williams Spas, Edward Jones Investments, Harley Davidson Swimwear, Harrah's Casino's and Miller Beer, as well as in fashion shows for Fredrick's of Hollywood. Named one of the "Sexiest Women on the Planet" by magazines from four continents, her face and body have graced magazines across the globe, including Esquire, GQ, Maxim, FHM and Playboy. In 2004, Chanel created her "Chanel" Swimsuit Calendar; garnishing awards year after year and becoming a seasoned producer of photography and editorial layouts. Her shoots appear regularly on magazine covers and editorials around the world; in publications such as FHM, DT, NUTS, Men's Edge, People, Ralph, etc. Her clients range from fashion designers, models and actors, feature film campaigns and image consultancy. An avid animal lover, activist and "rescuer", Chanel shares her home with two "adoptees"; a cat named Ruby Tuesday and a border collie named Lucky. A portion of the proceeds from her numerous autograph appearances, go to support animal charities each year.